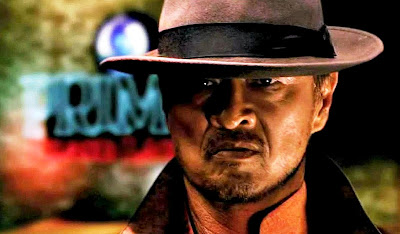 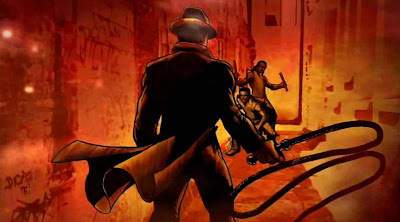 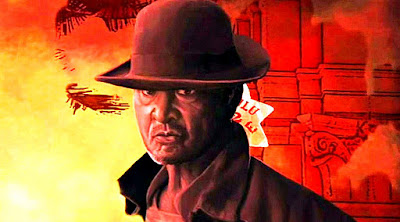 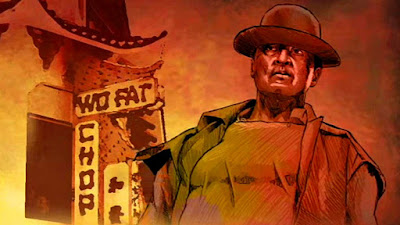 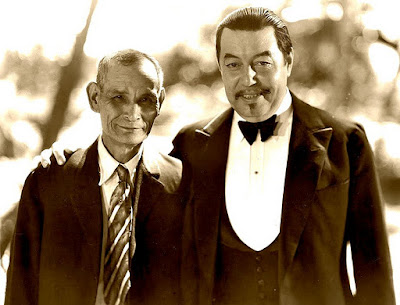 Detective Chang Apana and Warner Oland, as Charlie Chan, during the filming of "The Black Camel" in Honolulu in 1931.

It is not well known that Detective Chang Apana, who lived in Hawaii, was the prototype for the fictional detective Charlie Chan, created by author Earl Derr Biggers.  There a a number of items that appear in the Charlie Chan novels that can be linked directly, or indirectly with Detective Chang Apana.  In “The Black Camel” (1929), it is mentioned that Chan’s oldest daughter is named Rose. Chang Apana’s youngest daughter was named Rose.  In the “House Without A Key” (1925), the captain of detectives is named Hallet. From 1923 to 1927, a man named Kellett was the Captain of Detectives of the Honolulu Police Department.  In “The Black Camel” Charlie Chan laments “…there has been upheaval in local police department…”, as a result Chan gets promoted to the rank of inspector.  On February 20, 1928, Chang Apana is promoted to Detective First Grade, after a major police scandal.  Before becoming a policeman, Chan worked for a wealthy white family, the Jordans.  The same can be said of Apana who worked for the Wilder family as a hostler.  Both Chan and Apana were excellent cooks.  Apana was chef in charge of a big luau that was given for the Prince of Wales when he visited Honolulu.  Chan lived on Punchbowl hill, while in 1908, Apana lived on Punchbowl near Hotel Street.  Chan worked very slowly and meticulously on cases…”I have never been demon for speed…” (“The Black Camel”).  The same can be said of Apana.  In their respective modus operandi on cases, both Chan and Apana worked alone.  Chan spent most of his time running down gamblers; that was also Apana’s major job.  In “The Black Camel”, it is mentioned that Chan has 27 years of service on the job; Apana by the time of the writing of “The Black Camel”, would have served approximately the same length of time.

Chan’s method of inquiry on a case was to investigate the human heart.  Apana, too, was a keen student of the human heart and character.  Neither Chan nor Apana drank alcoholic beverages. Both Chan and Apana resisted many and all attempts of bribery; as Chan says “All those years on the force, beset with temptations, but always honest, always irreproachable,” (“Keeper Of The Keys”).

In two Chan novels there appears an Inspector Duff: For many years Apana worked under a Chief of Detectives named McDuffie.  In “The Keeper Of The Keys”, there is a Chinese servant named Ah Sing, who spoke in a high shrill voice and used broken English.  Interestingly, Apana’s given first name was “Ah Ping”, and he too spoke broken English in a high shrill voice.  In appearance, Chan was fat, but Apana was slim. The device of polarity is often used by authors to disguise the original that a character is based on (see above, Rose being Chan’s oldest daughter and in actuality Rose was Apana’s youngest daughter)

It is easy to see from the items mentioned above that the similarities between Chan and Apana are more than just cursory.

Detective Chang Apana was really Hawaii's first action hero.  He once arrested forty suspects all by himself in Chinatown, with absolutely no backup at all.  That is an accomplishment that has never been equaled in the historical records of the Honolulu Police Department.  Here are some of Detective Chang Apana's exploits as described in a soon to be released book about his life called "Charlie Chan's Hawaii":

"Fred Kramer, retired Captain of the Guards at Oahu Prison and Halawa Jail, had some interesting reminiscences about Detective Chang Apana.  Kramer actually saw Apana in action leaping from roof to roof in Chinatown, like a human fly. In appearance, Kramer recalls, 'Apana looked so frail that one slap could break him apart.' "

"Apana, though fragile in appearance, was in reality a very tough guy.  Once while Apana was attempting to raid a gambling game, he was hurled from a second story window, but like the proverbial cat, he landed miraculously, on his feet unhurt.  Another time when arresting a dangerous Filipino suspect, he was slashed across the stomach with a knife. Again he emerged unscathed as the knife landed on a broad belt that he was wearing."

"Apana had another close brush with death during the arrest of a prison escapee. He was assigned with Chief of Detectives Arthur McDuffie, and Assistant Chief John Kellett to capture a Korean, who had broken out of jail, and who was known to be a desperate character when cornered.

They finally located their quarry, hiding under a house. When he was ordered to come out the suspect replied with a fusillade of shots, one of the shots boring the palm of Kellett's hand.  More shots followed that narrowly missed hitting McDuffie and Apana.  In a lull between the shots being exchanged between the escaped felon and the officers, Apana sneaked around to the back of the house, while the other two officers held the fugitive at bay.  In the twinkling of an eye, Apana pounced on the escaped prisoner.  He was in the midst of a life and death struggle when the other two officers came to his rescue.  At the end of this ordeal, Apana was in such bad shape, that he had to be taken to the hospital for a week to recuperate."

In this edition of Angel Watchers we are featuring two cool videos.  Please click on video widget right below this post to watch "The Legend Of Chang Apana" that was produced by Jon Brekke, for Oceanic Creative Services in Honolulu.  It is the pilot for a proposed TV series that hopefully will be in production soon.  Unfortunately, though,  they got Detective Chang Apana's badge number wrong.  It's supposed to be badge number 100, not badge number 352.  That badge number however was retired after the death of Apana.  When the series finally gets going they should have technical advisers on hand to catch mistakes of this kind.  The creators of "The Legend Of Chang Apana", have put together incredible graphics, along with a script that has a smooth contemporary feel to it, to tell the exciting story of Detective Chang Apana.  It stars Cary Hiroyuki Tagawa as Chang Apana.  This movie is hip, slick, intelligent, and very now.  My congratulations go out to the makers of "The Legend Of Chang Apana", for doing such an outstanding job.  The bottom video is a short clip from a Charlie Chan movie called"The Black Camel" that was filmed on location in Honolulu in 1931, starring Warner Oland as Charlie Chan, and Bela Lugosi as Tarneverro.  Safe journeys to all the fans of Angel Watchers, wherever you may be.

"The Legend Of Chang Apana"