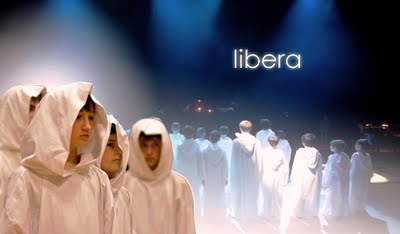 The music of Libera sustained me during a very dark period of my life.  In the year 2000 I was undergoing an intense personal crisis and quite serendipitously I discovered Libera on the Hearts Of Space radio show that is featured weekly on National Public Radio.  This particular program was called "Ascension".  One of the songs that was played was "Jubilate" by Libera.  Mind you I had not heard of Libera before, but when I heard that song, it was as if a warm beam of light came upon me and lit up my soul.  For the first time in a year, I felt like a "real" person again.  From then on I listened religiously to the Hearts of Space program hoping to hear more music from Libera.  In this edition of Angel Watchers we are featuring a triple-header, a troika, if you will, of Libera's music from their "Peace (Luxury Edition)" album.  The songs are:  "Time", "Deep Peace (Gaelic Blessing)", and "Lullabye (Goodnight My Angel)".  Safe journeys to all the fans of Angel Watchers, wherever you may be.

"Lullabye (Goodnight My Angel)"
Posted by Endyr at 12:08 AM No comments: 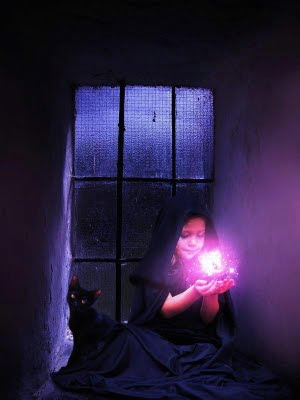 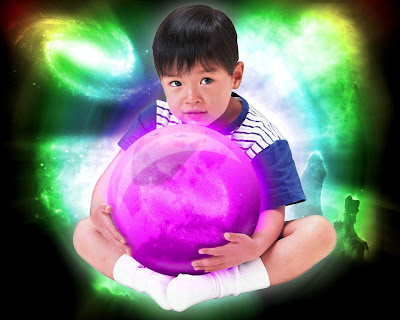 "The Child In Us" by Enigma is both beautiful and evocative.  It takes me to wonderful places, and I feel at peace listening to it.  It is no wonder that it is an international sensation.  The haunting music of "The Child In Us" brings to mind Max Erhmann's "Desiderata".


A Paraphrase of Max Erhmann's "Desiderata" by G. M. Jr.

Go calmly amid the noise and the rush, and remember what peace there may be in silence.  Avoid loud and aggressive people, as they are very troubling to the spirit.  As far as possible, without surrender, be on good terms with everyone.  Speak your truth quietly and clearly.  Listen to others, including the dull and ignorant, even they have a story to tell.

Be yourself, do not fake affection and do not be cynical about love, for it is as lasting as the grass.  Take kindly to the counsel of time, and give up gracefully the things of youth.

If you compare yourself with others, you may become vain or bitter, for there will always be greater and lesser persons than yourself.  Enjoy your achievements, as well as your plans.  Be interested in your own career, no matter how humble, it is a real treasure in the changing fortunes of time.

Be gentle with yourself.  Sometimes we search too deeply within ourselves, and allow darkness to feed our fears.  Many of these thoughts are not real, but are merely the children of fatigue and loneliness.  Keep your spirit strong, and it will protect you in times of trouble.

Be careful in your business affairs, for the world is full of cheats and fakes.  But do not let this make you blind to the goodness in others.  There are still many people who are brave, and have high ideals.  Be cheerful.  Despite all its problems and broken dreams; it is still a beautiful World.  Try to be happy.

And whether or not it is clear to you, the Universe is unfolding as it should.  You are Child Of The Universe, no less than the trees and the stars; you have a right to be here.

(The "Desiderata" which means desired things, was written by Max Ehrmann in 1927.  It is now in the Public Domain.)

May The Peace And Joy Of Pure Angel Light Bless And Keep You Safe And Warm.   Safe journeys to all the fans of Angel Watchers, wherever you may be. 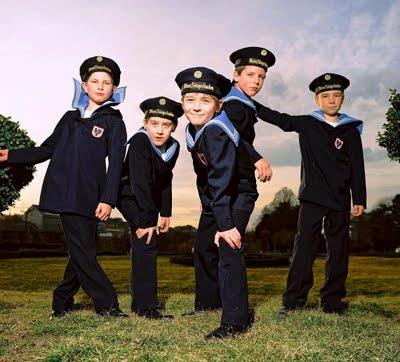 This new video from the Vienna Boy's Choir is a joy to watch.  At first I was going to feature it on another blog, but I changed my mind, and decided that it would be more appropriate for Angel Watchers.  "O Fortuna" from Carl Orff's magnificent "Carmina Burana" has always been one of my favorite classical pieces, but this new version by the Vienna Boys' Choir really knocked me off of my feet.  It's totally cool!  In fact it's still making me smile.  My Dear Aunt Martha thought that it was wonderful and urged me top post it as-soon-as-possible.  Oh well, that's Aunt Martha.  She really loved the video.  So come on now and let's have some fun playing soccer with the Vienna Boys' Choir!  Safe journeys to all the fans of Angel Watchers, wherever you may be. 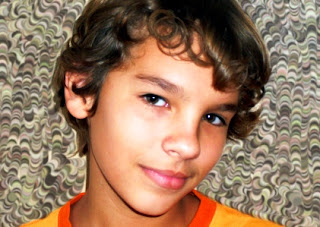 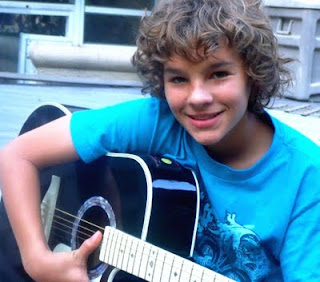 I was stumbling around the internet, as usual, looking for material to use on Angel Watchers, and quite by accident I found an icon that was linked to a "Street Children" video.  So I thought, "Oh, this might be an interesting change from my usual internet searches."  I presumed that it was probably a somber documentary about the plight of street children around the world, as it was not listed in the music section of the website I was browsing.  Man, was I in for a shock when the video started to play.  First it was that catchy Caribbean beat, then Allan came on and I nearly jumped out of my chair, I said "Whoa, wait a minute what is this?"  Needless to say, I was completely floored.  Allan, was born in the U.K., but moved with his family to Trinidad and Tobago as an infant.  He has starred in many Broadway productions in his hometown, and has won song contest in Trinidad and Tobago.  Not only that, but he is in the Gifted and Talented program at his school.  I think that UNICEF should use "Street Children" as their theme and anthem, because it is really, really good.  "Street Children" was composed by Allan's mother Deborah.  It's is fun to watch Allan during the long instrumental breaks where he does not sing.  By-the-way, I just love his Trinidadian accent.  Allan now lives with his family in Florida.  Allan's YouTube page can be found at this link:  Allan Clelland-Goddard YouTube Channel  Safe journeys to all the fans of Angel Watchers, wherever you may be.

Angelic Choirboys With An Attitude │ Lord Of The Flies 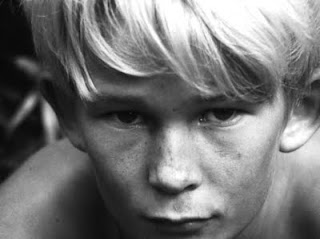 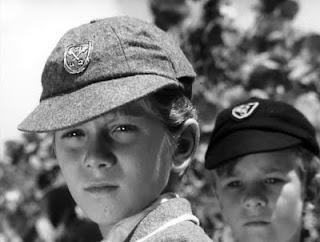 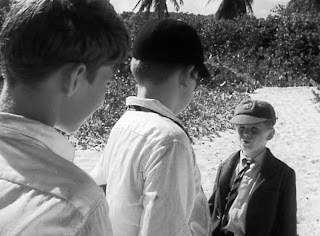 The images and the plot of "Lord Of The Flies (1963)" are so intense, and at times so horrific, that it makes one forget, or not notice that the film contains an incredibly beautiful soundtrack.  Raymond Leppard, the composer, wrote a couple of sensational variations on the liturgical "Kyrie Eleison (Lord Have Mercy)" theme.  In this edition of Angel Watchers I am presenting two different settings of the "Kyrie Eleison" from "Lord Of The Flies".  The first one is a cheeky, breezy, almost insouciant rendition by the rogue choirboys as they are marching along the beach at the beginning of the movie.  The second "Kyrie Eleison" is sung darkly to accompany the death of Simon.  I call this one the "Kyrie - Requiem".  The murder of Simon the mystic is so disturbing and senseless, that it makes me mourn for him every time I see this scene, but underscoring it is a "Kyrie Eleison" that is both haunting, and unforgettable.  By-the-way, the 1990 remake of "Lord Of The Flies" just does not have the impact, and power of the original.  It is my opinion that too much editing, and rewriting was done.  Safe journeys to all the fans of Angel Watchers, wherever you may be.

"Kyrie Eleison", On The Beach. 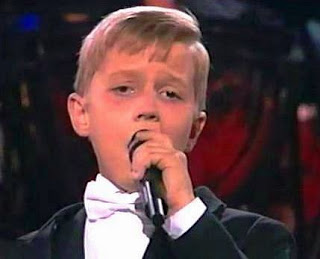 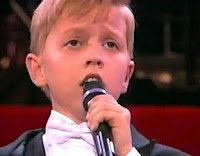 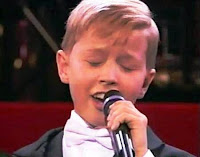 With all of the talk recently about The Rapture, and The End Of The World, it's about time that we settle down and find some peace in our lives.  It's unfortunate that a lot of people were taken in with the recent Dooms-Day prophecy that did not happen.  Let's take some time now to enjoy Michael Junior's beautiful rendition of Franz Schubert's "Ave Maria".  May The Peace And Joy Of Pure Angel Light Bless And Keep All Of You Safe And Warm.  Safe journeys to all the fans of Angel Watchers, wherever you may be.