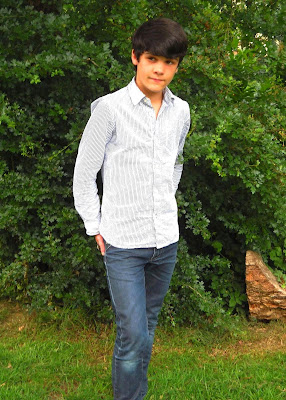 1.  What is it about singing that you like the most?

"Yes, I do have a vocal coach.  Her name is Carole Duval and I have been studying with her for five years now.  I meet with her once a week.  The rest of the time I practice alone at home."

3.  How long have you been singing for the general public?

"I first sang in public at the age of eight.  I am now thirteen, so I have been singing for five years now."

4.  When you are singing, what kinds of thoughts go through your mind?

"Each time I sing, I imagine myself in the future, on a big stage, for example, like that at the Paris Olympia (the Paris Olympia is the oldest music theater in France, and it is also one of the most famous musical, and theater venues in the world).  I always imagine that I am a famous singer.  I don't know why though.  Maybe, it just gives me energy."
5.  What are some of your favorite songs?

"It actually depends on the time I am singing.  At the moment I really love "SOS D'Un Terrien En Détresse', because even though it is a difficult song, I love the feelings, the sensations that it give me when I sing it.  I also like "In Your Hands".  It's quite different.  I love all of the songs that I sing.  If I don't like a song, I can't sing it well."

6.  How do you feel when you are onstage?  For example; happy, nervous, apprehensive, excited etc.

"It is a strange mix of different feelings, for example; happiness or sadness.  It actually depends on the song.  When I sing the songs of Grégory Lemarchal, I am sad because he died a few years ago, and I really loved him."

7.  How long does it take you to prepare a new song before you present it on stage?

"It depends on the song.  Some songs are easy, and it only takes me one day to learn them.  Others songs are more difficult and they may take me a few weeks to learn."

"As of yet I don't have any CDs or MP3s for sale, but I hope to have some for sale in the near future."
9.  How often do you give concerts?

"It depends on the time period.  For example, last summer, I sang in concerts twice a week.  I also did commercial animations for some supermarkets a few times.  Last week I sang for some old people, and in a few weeks from now, I will be appearing in a cabaret with a magician, and later on I will do a Christmas show.  So I do perform a lot."

10.  Do you plan to make singing your professional career?

12.  Who are some of your favorite recording artists?

"Besides singing, I really enjoy bicycling."

14.  Do you speak any foreign languages?

"I speak English and Spanish, but I am still learning those languages."

15.  What are some of your favorite movies?

"I like the 'Star Wars' movies, the James Bond movies, and 'The Simpsons'.  I like a lot of American movies."

16.  What are your favorite foods?

"I love to eat just about anything, but my favorite foods are chocolate, cakes and sweets."

17.  Do you plan someday to perform in operas?

"Yes, I was asked a few weeks ago to sing in the Tunis Opera (Tunisia) in July 2011.  I will have more details about that shortly and I will share that information with you."

18.  Have you concertized in other countries besides France?

19.  What do you think about American popular music in general?

"I love some American music, but they are some songs that I don't like because they don't feel 'true'".

20.  Is there anything that you would like to say to your fans on Angel Watchers?

"I am very happy that you love my music, and I hope to meet all of you someday at one of my concerts."

Wow, that was some interview!  Angel Watchers feels very privileged, and blessed that Valentin, and Nadège took the time to answer all of our questions.  Please log on to Valentin's YouTube channel for many more videos at this link:  Valentin's YouTube Channel  In 2008 he was the winner of the highly competitive  L'Ecole des Stars. When he was interviewed by the judges of that competition he was very likable and displayed a wonderful boyish charm.  He is an excellent singer with natural grace and poise.  In this edition of Angel Watchers, we are presenting Valentin in a double play.  In the video widgets below he sings two songs.  The first song is the incredibly difficult "Le Manége (The Ride)"  that was composed by French singer and composer  Stanislas.  I've listened to Stanislas' version of   "Le Manége", which is great, but I prefer Valentin's rendition because of its youthful innocence and sensitive pathos.  I just love that bowler hat the wears in the video.  It's the perfect touch to a very classy performance and image.  In the second video he performs "Con Te Partirò (With You I Will Leave)" the signature song of Andrea Bocelli, composed by Francesco Sartori and Lucio Quarantotto.  Valentin continues to perform in France and elsewhere.  He will go far in the music business, because he is very talented and loves music with all of his heart.  Valentin, May The Peace And Love Of Pure Angel Light, Bless You And Your Career.  Safe journeys to all the fans of Angel Watchers, wherever you may be.